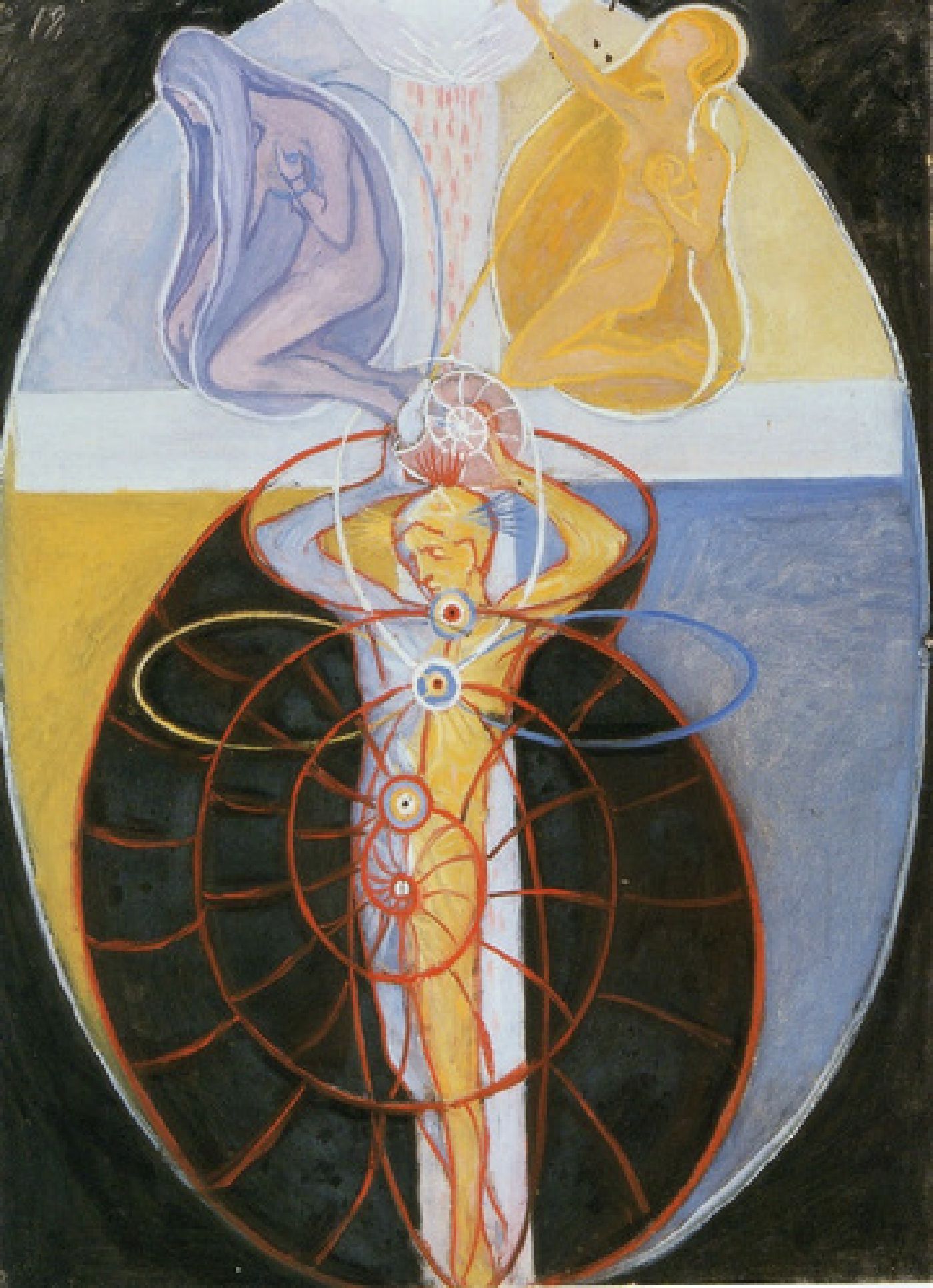 The level of the soul

The first year's development was about raising awareness and cleansing at the level of the soul. The development started abruptly when I began training qigong in August of 1999.

My spiritual development was initiated through a powerful spiritual breakthrough, which I later understood was what is known as a kundalini breakthrough in some Eastern philosophies. I participated in a qigong training and when we were training, I got an out-of-the-body experience. Suddenly I was up under the roof, high above my own right shoulder. I saw all the people in the room but not as they usually appeared, but as big ovals of energy. Between them there were some kinds of tubes or threads. The force was enormously strong.

Suddenly I came into a completely empty "mental" room. It was like I was in another universe, I did not feel scared but, on the contrary, I was slightly amused. I knew I had been there before. Certainly, I felt foolish and insecure, but I nevertheless had some kind of authority, a feeling that I was the leader in some way. Above all, I had a strong sense of standing "over" what happened, I was not unengaged but somehow emotionally calm or free. Nowadays, after experiencing many different states of consciousness, I understand that for a moment I was taken to the level of universal mind. This level is described as emptiness and is called shunyata in Buddhism.

Opening and cleansing of chakras and nadi in the energy body

Even though I did not understand it when it happened, the experience of the strong kundalini breakthrough meant that my consciousness had shifted from the physical body and the earthly personality to the soul and thus also to the domain of the energy body. The energy body is the subtle body described in some Eastern philosophies. I discovered that the energy body was connected to the physical body, but at the same time stretched beyond it.

The energy body is the carrier of karmic blockages that have been created by negative experiences in previous lives that the soul has not been able to handle. I clearly experienced the energy body with its channels and blockages, and how the ever-increasing spiritual force I received worked on the energy body for cleansing and dissolving of blockages.

We are gathered again - what is the plan?

The qigong training and the group around it came to mean a lot for my development during the first two years. From the first day in August 1999, I had a very strong feeling that some in the group were souls that I had known in previous lives and that I had strong karmic ties to them. I also had a strong feeling that there was a hidden plan, which I did not know about, and that we had been gathered for some unknown but crucial event.

I noticed a review of the Millennium Exhibition at Liljevalchs with Hilma af Klint's works in a magazine and immediately decided to visit it, even though I had never heard of her before and I rarely or never went to art exhibitions. But in the article there was a picture of one of Hilma af Klint's paintings (Series WU / Rosen. Group 3 No. 1). When I saw the picture, I intuitively knew what the whole exhibition would contain. The exhibition was really the beginning of a new stage.

At the exhibition, I felt the strong power emanating from the paintings. This feeling, along with the feeling that, even before I got there, knew what the paintings would contain was incredibly shattering. I discovered that some of the paintings had motives from the qigong training I had started and now I also got an even stronger feeling that there was an unknown plan that was active. At the exhibition, I bought a book about Hilma af Klint by Gurli Lindén, and there I discovered that Hilma and her friends had been preparing for something crucial that would happen the next life. But at that time, I did not at all understand what all this meant.

The opening to the level of the soul also meant that I began to get glimpses from earlier lives. In addition to the feeling that I had connections from previous lives with souls in the qigong group, I also got glimpses of past lives in dreams and in connection with the training. At some occasions at the very beginning of my spiritual development, I saw a beautiful black and white marble floor in front of me when I was training. The floor had a square pattern with varying black and white squares. On each black square, there was a lily in white, and on the white squares there was the corresponding flower in black.

One Thursday during my qigong training I saw the black and white floor again, but now the vision continued. I lifted my eyes and saw a big pool or lake to the left of me. It was surrounded by green plants, that could have been palms. I stood in an arcade with beautiful pillars and in front of me I saw a man in some kind of white robe. He was a high priest. I heard a voice that said, "in Karnak in Thebes, 3000".

I had a feeling that "3000" meant 3000 years ago or that it was 3000 years B.C. I did not understand what I saw, I associated Thebes with Greece. But later I stumbled upon the word Karnak in a book and read that it was the ancient center of Egypt, and that it had been situated in Thebes. I also kept hearing the word Thutmosis III repeatedly within me. I bought a book about the ancient Egypt and there was a map of from Karnak at the time of Thutmosis III. The map exactly described what I had seen in my vison. Thutmosis III was Pharaoh about 3400 years ago.

In the spring of 2000, I had begun to create a sort of map of past lives that started in ancient Egypt, continued with "gnostics" and medieval "rosicrucians", with Hilma af Klint and her group and ended with the souls in the qigong group.

Contacts with the spiritual dimension

Already when I attended the first qigong training, I had received a "message" where a female voice said "you can continue from the level where you last finished." During the autumn, I also had dreams involving contacts with spiritual forces, including some "Tibetan" monks or doctors and an old Chinese master (Lao Tzu) who transferred spiritual power to me. After the strong experience at the exhibition with Hilma af Klint's paintings, I was very worried and the following day I received another spiritual contact. It was a high spiritual power that conveyed a strong sense of consolation and security and he also carried a scent of wool with him.

During the spring of 2000, I received further spiritual contacts and transmissions of spiritual power and information. The night after a qigong training in May 2000, I experienced a strange phenomenon. It was as if a lot of "packed" information streamed down into my brain. It was an intense, flickering light and a strong sense of spiritual energy or power. I had the feeling that the "packages" were knowledge that would be unpacked in my brain.

Love is the greatest of all

Spiritual power was an important theme throughout my development from the first breakthrough in the autumn of 1999. During this first year, I struggled to open myself to love and to extend it from the earthly level to the spiritual level that lies over the present life and is active over time and space. At the end of this first phase I realized that the spiritual power is love, and I also got a confirmation of this from my spiritual teachers.

During the first year, the ancient mystery philosophies began to surface in my consciousness. But because knowledge of them has been destroyed and condemned by the Christian church, it was quite difficult to understand what it was I was experiencing. Now I know that these mysteries related to knowledge and insights that I had gathered in different past lives, and when the door to the level of the soul and the S​elf opened, this knowledge also began to become aware. But I did not experience these mysteries as theories, but as spiritual forces that were real and seemed to help me forward. Among the spiritual currents that were actualized in this first year, there were the Egyptian Mysteries, Taoism, Vajrayanabuddhism, Dionisio’s mystery and hermetism. But initially, it was very hard to identify these spiritual forces and it would take several years before I fully understood what I was experiencing and what spiritual currents were active.

The first initiation - the cruzification of the soul

After Midsummer of 2000, I participated in a nine-day training course where we were just over one hundred people who lived together and only practiced qigong from early morning to late night. During this time, I took a new big step forward, although I still did not understand what was happening. The first initiation in my own mystery meant that in a tremendously strong spiritual power, I saw how the soul climbed up three steps and then rose on the cross. Love was a driving force in this experience. By overcoming my own irritation and instead attempting to send power in the form of love to a person who was subject to my aversion, I suddenly was released from the current level and received the initiation to the next level. After this initiation, my understanding of the male-female character of spiritual power also deepened and the all-encompassing love grew further.

In connection with this opening, I had a lot of visions of symbols of power, while at the same time I received spiritual power. I also experienced other phenomena such as light, tones and strong perfume scent radiating from my body, or rather from my energy field. The strong spiritual powers i received also created tremendously strong physical and mental reactions when the power worked to solve blockages that existed in me.