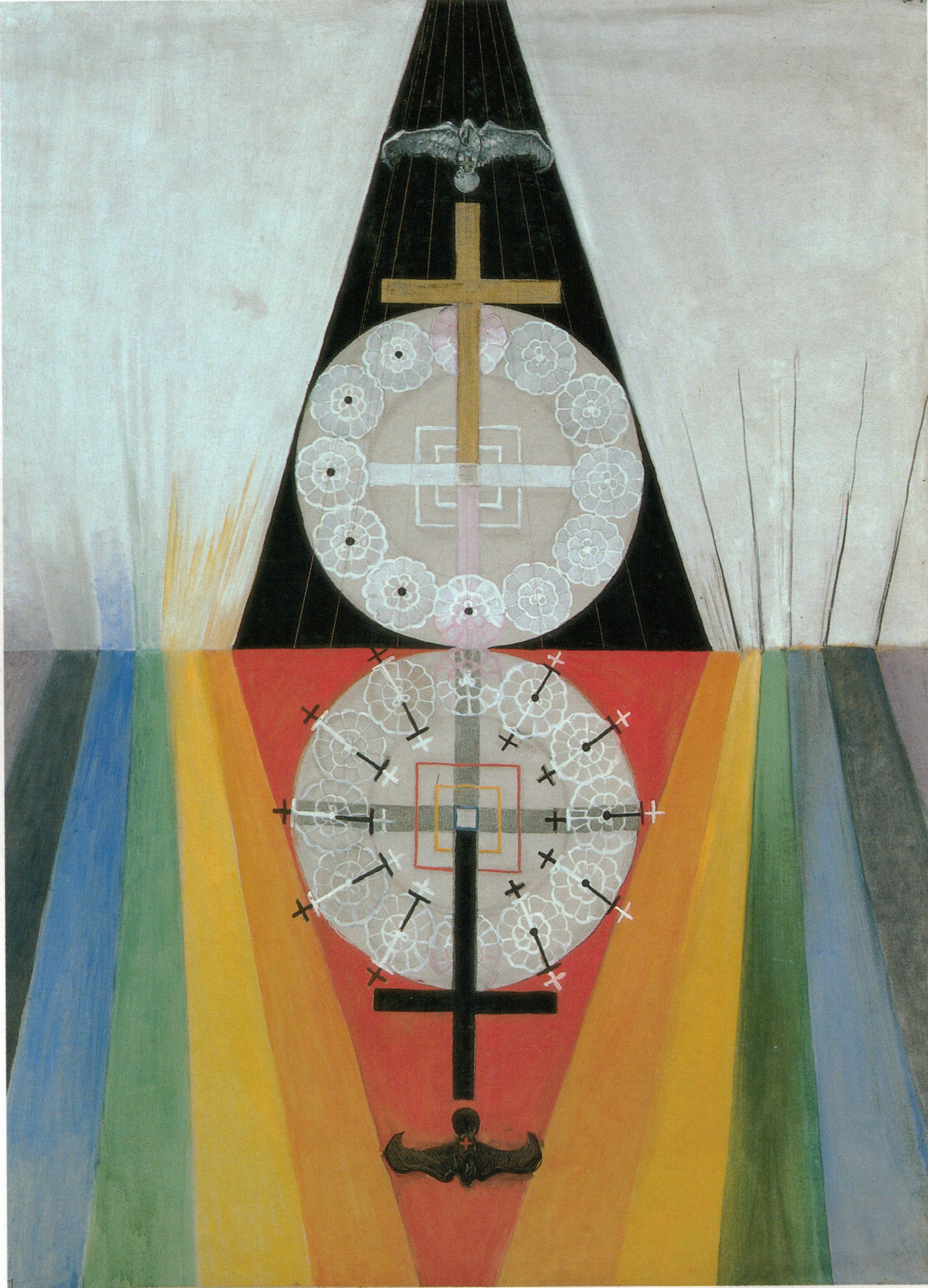 Fascism, Nazism and New Age have the same foundation

There are many different fascist, non-democratic and power-hungry groups, both to the right and left in politics and in other contexts, but they all share some basic principles. Among the core features that I find in all types of movements that I want to define as Fascist are the following:

1. We in our group are chosen to rule the country/world by: a. God, b. the Evolution.

2. We are superior to everyone else because we: a. are God´s chosen people, b. are the righteous ones, c. belong to the superior race, d. have a superior spirit and the strongest will, f. belong to the best social class.

4. Our Leader is strongest, best and infallible because he: a. is chosen by God, b. has the strongest and most superior Spirit, c. is the mightiest and wisest man, the crown of the evolution, d. has lots of money and weapons.

5. Our truth is the only truth because: a. it is God's own words that He has conveyed through His prophets in the Holy Book. b. it is the Great Leader's own words (Marx, Lenin, Hitler, Mussolini, Mao, Trump etc.).

6. Our great, infallible Leader loves us in our group above all other and he always only works for our own best.

7. We are besieged by enemies who threaten: a. our religion, b. our country, c. our race, d. our truth, e. our masculinity.

8. There will come a great apocalypse, a holy war, where we must struggle with our lives and assets for: a. God/our religion, b. our truth, c. our race, d. our country, e. our masculinity.

There are two main tracks in this model, either you take the religious track, which for a long time was the only one, and claim to be chosen by God, or you choose the evolutionary track that started in the late 1800s in connection with Social Darwinism ("survival of the fittest") and the new scientific racism that put the Aryan/white race on the pinnacle of evolution. The most effective, as Donald Trump is an example of, is of course if you can combine both these tracks and claim that you are chosen by both God and evolution to rule.

The origin of all fascist groups is the monotheism that was created in Alexandria around 160 BC to support the Maccabees in their effort to seize power in Jerusalem and to create a local army, a new people who could wage war against the Seleucids as agents of the Ptolemaic rulers in Egypt and their allies in Rome. The open, exoteric, "truth" conveyed by the Maccabean high priests was that their people since the beginning of history were chosen by God to rule in the land, and that prophets like Moses had predicted that they would go to war and conquer the promised land from the neighboring peoples. The hidden, esoteric, truth was that the people not were chosen by God but were used as pawns in a political game directed from Alexandria and Rome.

The open message in all totalitarian contexts is always that the Leader loves the people above everything, is fighting against their enemies and constantly is working for the higher purpose. But the hidden truth is that the leader and the inner circle of the cult/fascist party only work to create and maintain their own power that gives them everything they can wish for in terms of control over people, money, weapons, propaganda, etc.

The family tree of esoteric fascism

The family tree of esoteric fascism.

The kind of fascism I have been forced to try to understand is the collection of ideas that I have called esoteric fascism, which has given rise to both Nazism, New Age and today's international neo-fascism.

Esoteric fascism emerged in the early 1900s as a mixture of several different currents that were characteristic of the age. An important foundation was the scientific racism of the French Count Joseph Arthur de Gobineau that ranked the white race as the superior. Gobineau put the Nordic type as the highest because he thought it had the purest blood. According to him, mixing different races would lead to the fall of humanity. Gobineau's theory of the Aryan race's supremacy was later used by, for example, Houston Stewart Chamberlain who was an important source of inspiration for Hitler and other Nazis. The ideas about the Aryan race also inspired monists and the völkisch movement as well as secret occult orders in Germany and Austria, and in the next step leading Nazis.

Another central part of the mental climate that created Nazism was Nietzsche's philosophy about the Übermensch and his superior will power. Rudolf Steiner combined Nietzsche's philosophy with the teaching that was conveyed within the Theosophical Society and with Christian myths and prophecies into his own version of Theosophy, which he called Anthroposophy. Steiner wanted a more "Aryan" and western oriented Theosophy where he could portray himself as the expected world savior. Steiner also brought forward a fascist political ideal in the form of his Three Tiered Social Order. According to Steiner, an elite of the most developed men should govern the state by the moral laws that they, unlike everyone else, had gained access to. The capitalism of the United States and Britain was alien to the "German spirit" and should therefore not be allowed in Germany. Neither was democracy suitable for the Germans according to Steiner, instead they should be ruled by the most suitable person, the one who had the greatest spiritual power. The superior Führer that Steiner talked about was of course himself, but his vision of a spiritual dictatorship instead came to be implemented by Hitler.

Esoteric fascism gave rise to both Nazism and New Age

Esoteric fascism was the direct origin of Nazism, as leading Nazis participated in various secret or open groups within the domain of esoteric fascism. As an example, Rudolf Hess who was an anthroposophist and participant in the Thule society, helped Hitler write Mein Kampf. Esoteric fascism also was part of the abundant fascist, racist and anti-democratic ideas that permeated the German world at that time.

There also goes a straight line from the occult movements that were popular in the first decades of the 20th century, represented by people like H P Blavatsky, Rudolf Steiner and Alistair Crowley, continuing to for example, Alice Bailey and Ron Hubbard, and ending in today's New Age. In New Age, ideas of a forthcoming catastrophe and Christ's return are mixed with faith in Rudolf Steiner's alternative “revelations” in areas like science, medicine, nutrition and so forth. People strive to become powerful and successful by subverting various "spiritual" powers, and they still search for the strong man, guru and savior who will provide enlightenment and answers to all questions.

During the work with my latest book Kärleksgudinnans återkomst, I discovered that Julius Evola (1898-1974), whose writings belong to the global Neo-fascistic canon, is a direct link from both the esoteric fascism of the early 20th century and Nazism. Julius Evolas evil philosophy has inspired advisors to both Donald Trump and Vladimir Putin.

It may seem strange that the United States president, evangelical Christians, white-supremacists, Eurofascists and the Russian president now seem to have agreed and work towards the same goal. But the truth is that they all share the same basic values that can be traced back to Christianity and in the next step to the Spiritual Fascism that emerged in Germany in the early 20th century.

The black "magic" that was developed by charlatans like Rudolf Steiner and other members of various occult orders in the beginning of the 20th century only led to the rise of Nazism and the worst catastrophe in the history of humanity. It is terrible that this black spirit once again is nourished among the world leaders of today. Hate, racism, misogyni, lies and the belief in white male supremacy never have and never will lead to anything good because these forces are the direct antithesis to the Divine Spirit that is universal love.